We can all attest that when you look good, you feel good. When you’re wearing a glimmering crystal costume featuring Swarovski® crystals and created by trend-setting costumers, we can assume you feel like a winner.

“While the costume doesn't have any impact on the scoresheet, it really helps the dancers take the floor with confidence and bring to life whatever character they may be trying to portray. A beautiful costume helps showcase their poise and movement, and allows them to feel like rock stars when they hit their opening pose! It truly can help piece together the theme or feeling of a routine for the audience, and help create more visual moments for viewers.” -Amanda Gaines, University of Minnesota Dance Team coach

This weekend, the 18 members of the University of Minnesota Dance Team will literally be outshining their competition, thanks to the support of Rhinestones Unlimited, a Swarovski® Authorized Reseller. The ladies will be clad in custom-designed costumes adorned with Swarovski® crystals as they compete in the 32nd annual UCA & UDA College Cheerleading and Dance Team National Championship*, an event described as “the most prestigious college dance team championship in the country.” Held at the Walt Disney World Resort in Orlando, nearly 200 colleges, universities and junior colleges around the country send their cheer and dance teams- over 4,000 performers total- to compete in three days of high-energy, precision choreography, showcasing skills in cheerleading, partner stunts, jazz dance, hip hop, pom formations and mascot skits. The event is airing on ESPN Friday, January 15th through Sunday the 17th. 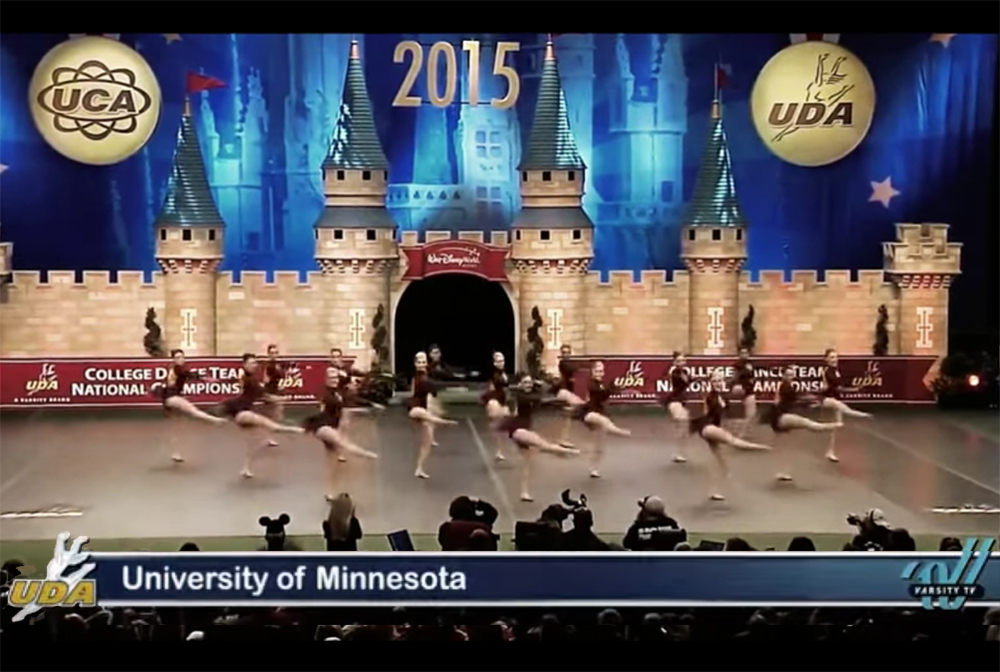 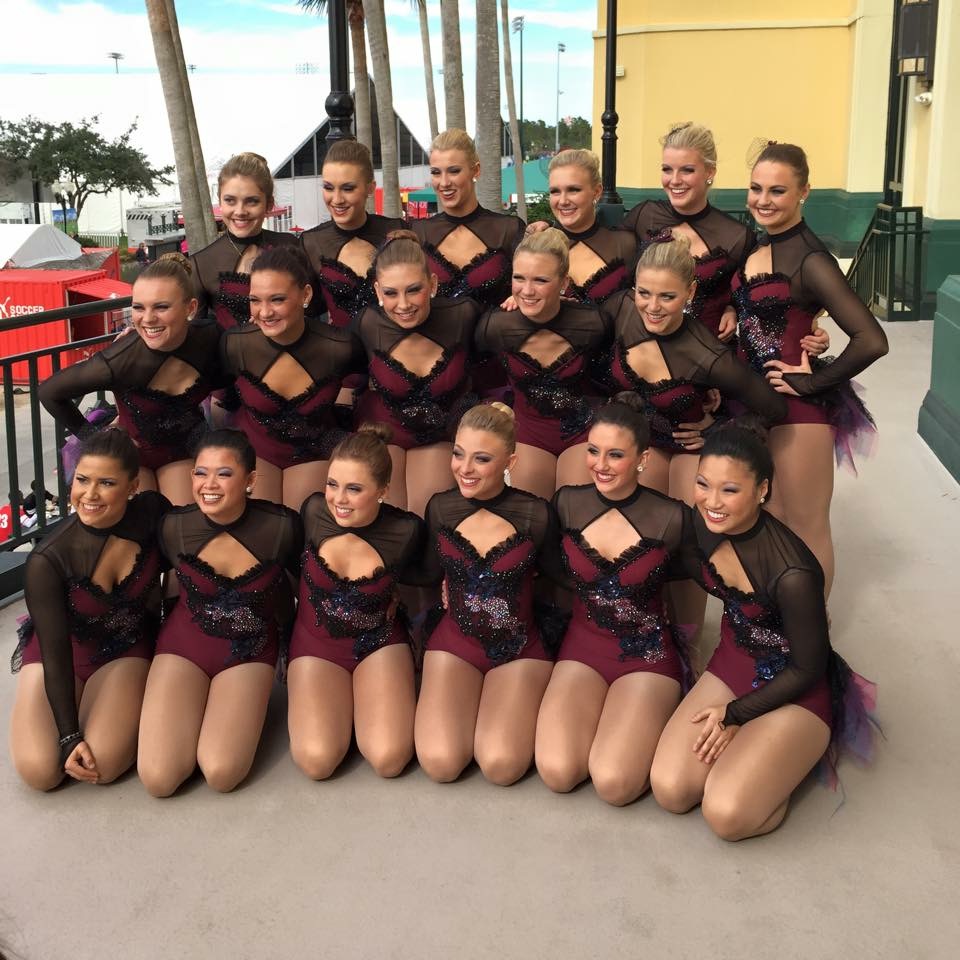 Jazz is one of the team’s strengths- a form of dance that is inspired largely by the music itself and uses a broad dance vocabulary that spans ballet, theatrical and modern movements. Last January, the 2014-2015 Minnesota team performed their jazz routine to Lorde’s sultry Hunger Games rendition of Tears for Fears’ hit, “Everybody Wants to Rule the World,” in a moody burgundy costume: a long sleeved leotard with a sweetheart keyhole, a layered tulle bustle skirt and a large backless cutout.

To every Minnesota fan’s horror, the University of Tennessee Dance Team also performed their jazz routine to Lorde’s sultry Hunger Games rendition of Tears for Fears’ hit, “Everybody Wants to Rule the World.” And, they too, wore a long sleeved leotard with a layered bustle skirt and a large backless cutout. And, they took first place.

In true fighting spirit, the Minnesota team was not dissuaded by the second place jazz results, finishing first in their pom performance- a more traditional style of “spirit” dance that incorporates pompons and requires all dancers moving in the same sharp unison rather than the intragroup variances that jazz allows.

In the past decade or so, the University of Minnesota Dance Team has taken a first place title in these two dances 15 times. This January, clad in jazz costumes designed in collaboration with Rhinestones Unlimited featuring crystals from Swarovski®, the team looks good! With all the renewed confidence that your stage look can give, the team hopes to show everyone up and reclaim their first place titles.

“This year, the team is really trying to tell a story with our jazz routine. While we are definitely hard at work to perfect technical skills, we are also pushing ourselves to bring a new quality to our performance, and engage the audience in a meaningful way. The routine is definitely something different than what we've brought the past few years, but we think it still showcases amazing choreography by Karl Mundt and beautiful execution by the team.”
-Amanda Gaines, University of Minnesota Dance Team coach

*Stay tuned all this week as we give you the inside scoop on the team, the Swarovski®-adorned costume and their jazz performance at the national event, which will be streaming live at 2:30 Eastern Time on Saturday, January 16th at www.UDA.Varsity.com. 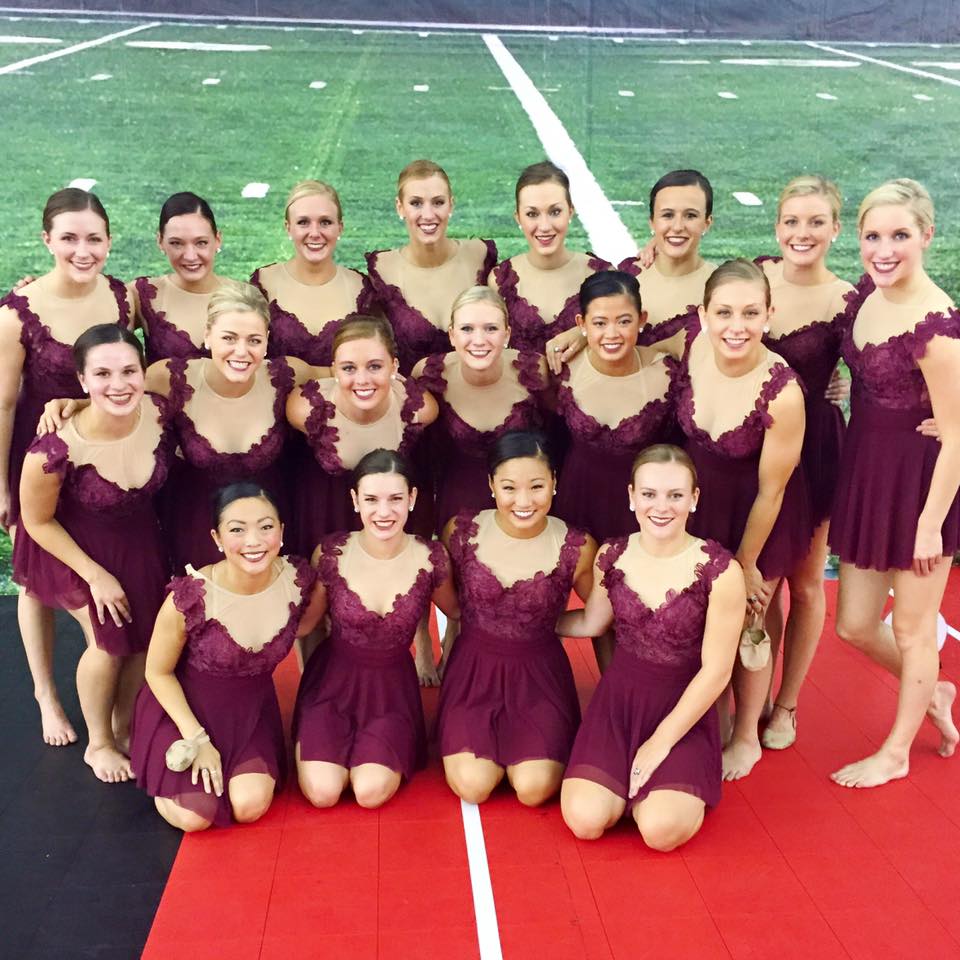