This is our 3rd year with this exciting costume creating competition, Sparkle In the Spotlight. This year we partnered with Swarovski and tied in the competition into their Crystals Around the World campaign, which invites you to embark on a 6-month journey around the world to celebrate Swarovski’s 125th anniversary. Each place we visit will bring new inspirations and sparkling color combinations. We will explore how color combinations act as a global identifier - just as a flag does for its country.

Our fifth stop is The Grand Canyon in the United States of America and this exquisite gown comes from the talented fashion designer Diego Medel, out of California. He was born in Mexico and started his love for sewing at an early age with his grandmother and two aunts had him hand sewing at 5 years old. They owned a couture dress making company and deciding he was another good set of hands that could help. Now, 25 years later, Diego has made quite the name for himself. He has outfitted many celebrities for red carpets, Mexican and Latino singers, Fashion week, The Grammys, The Oscars, Billboard Awards, Telemundo, and many film festivals. He now has an empire of several brands under his belt too; Quiceland, Quiceland Bride, Quiceland Kids, Quiceland Beauty, and Arte Charro (with more coming). Diego is excited to start a new adventure by offering fashion designer classes to his community starting this fall.

When Diego found out The Grand Canyon was his destination he was thrilled because he had just retuned from a family vacation there this summer. As you may have guessed, Diego speciality is creating one-of-kind quinceañera dresses. His biggest inspiration for this masterpiece is the magical sunsets that are created off the red rock of the greatness of the canyon. The mountain, the rock, the canyon, the sunset and the beautiful blue sky were all taken into account when he designed the fabric himself and had it laser printed onto silk fabric at his shop. Because flowers are such a huge part of his DNA and culture, he says has to put a little bit of his passion into each piece he creates to make it different and unique. He added the the bright blue flower on the shoulder to extend the skyline, making it much more dramatic. I would say it has Diego Medel's DNA all over that it, and that is one happy flower. 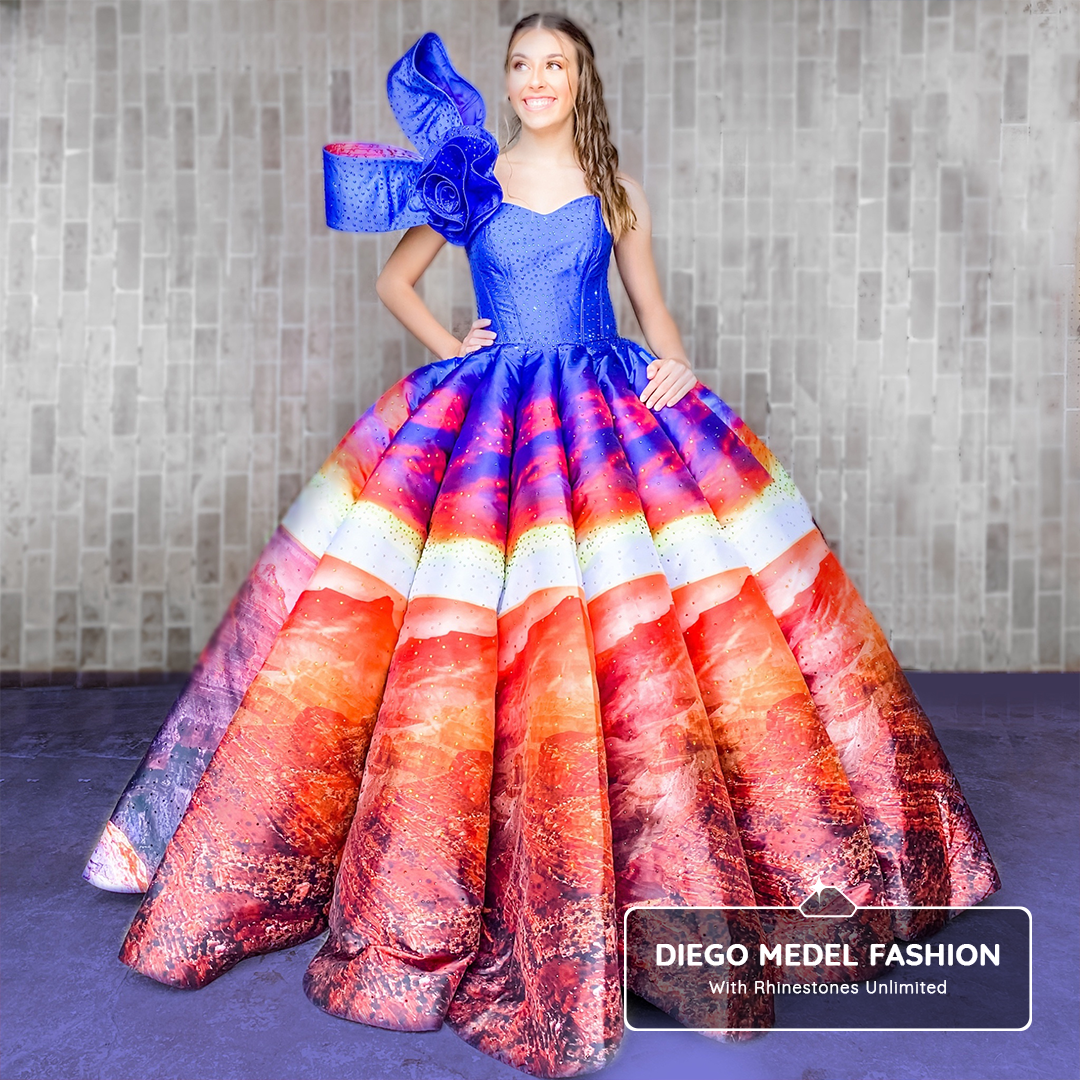 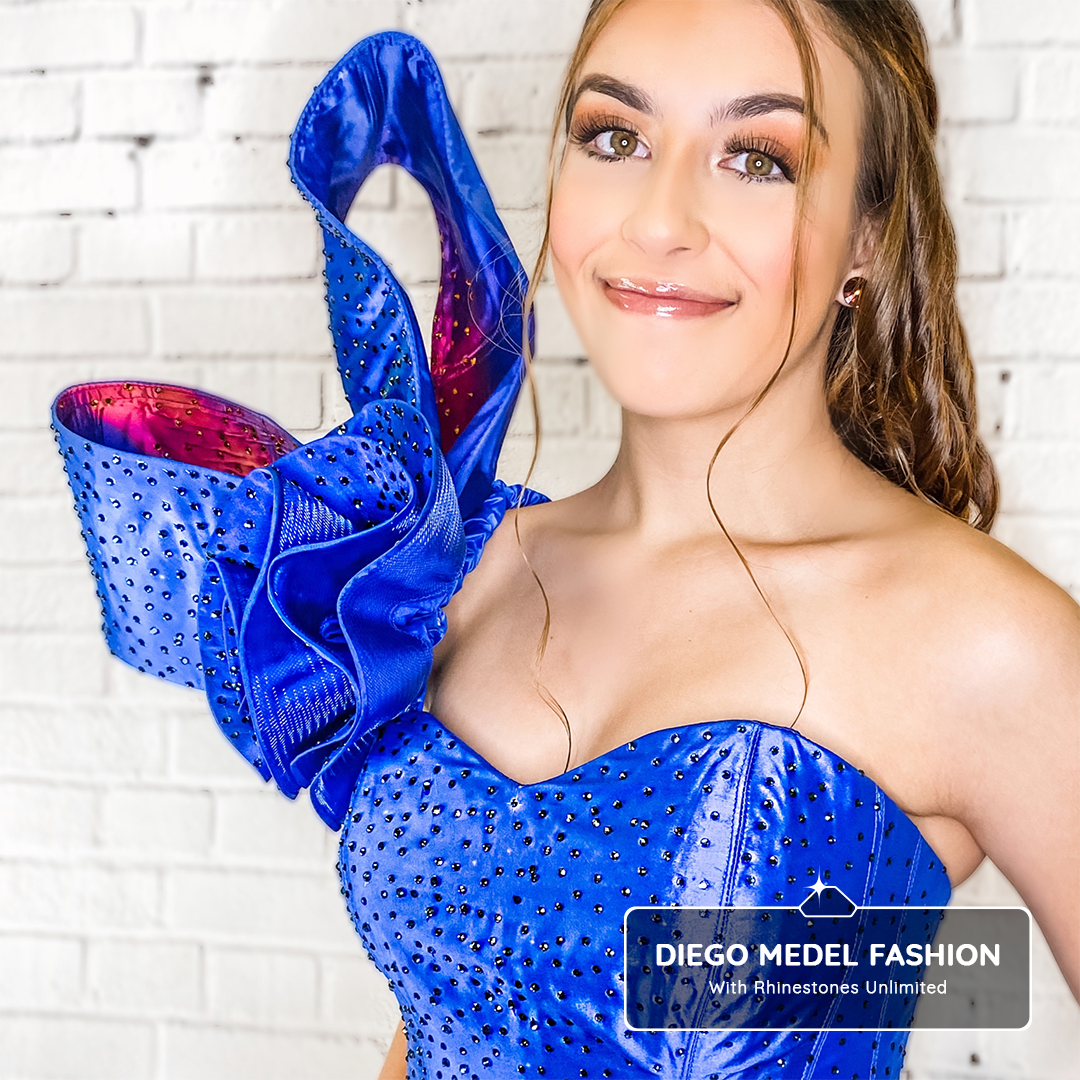 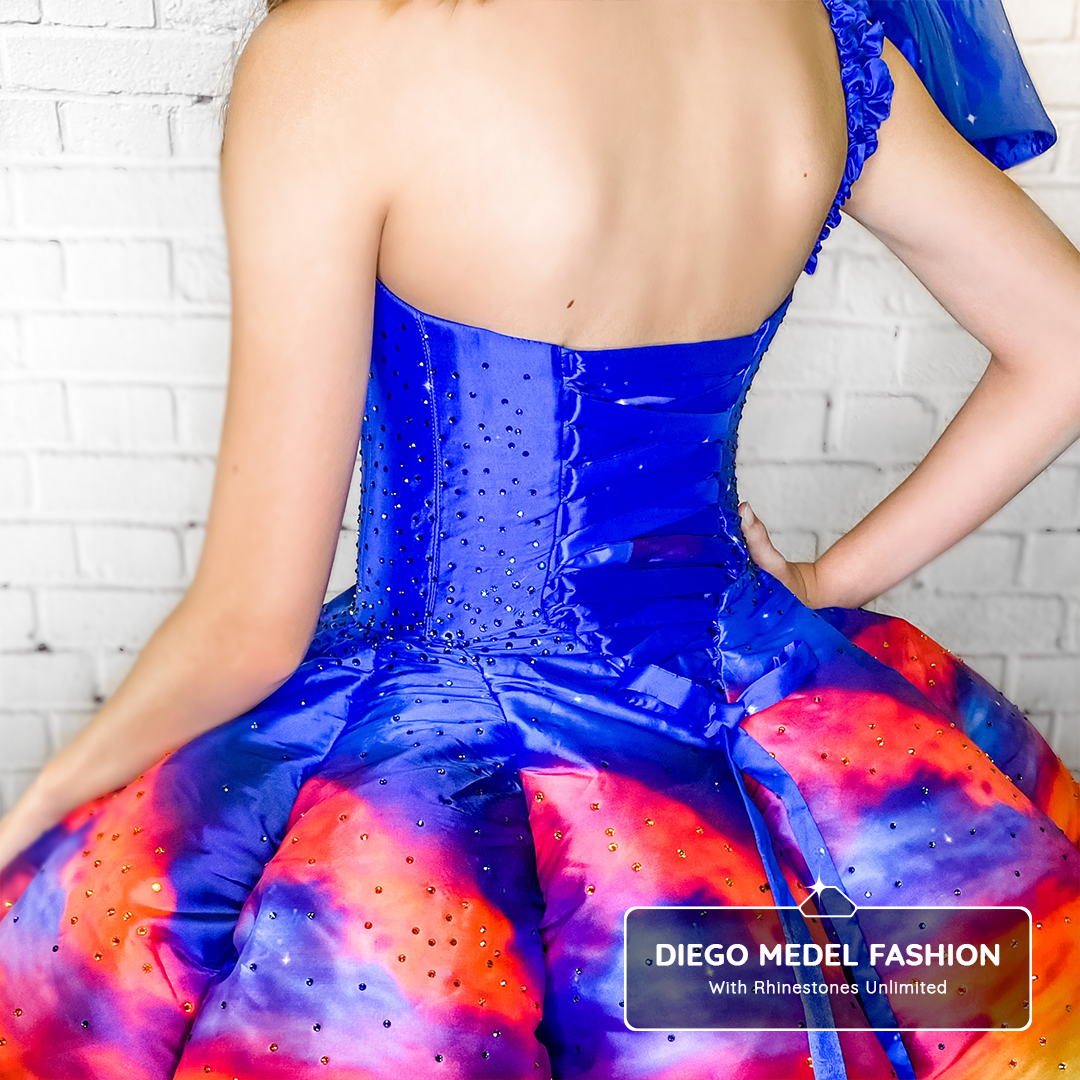 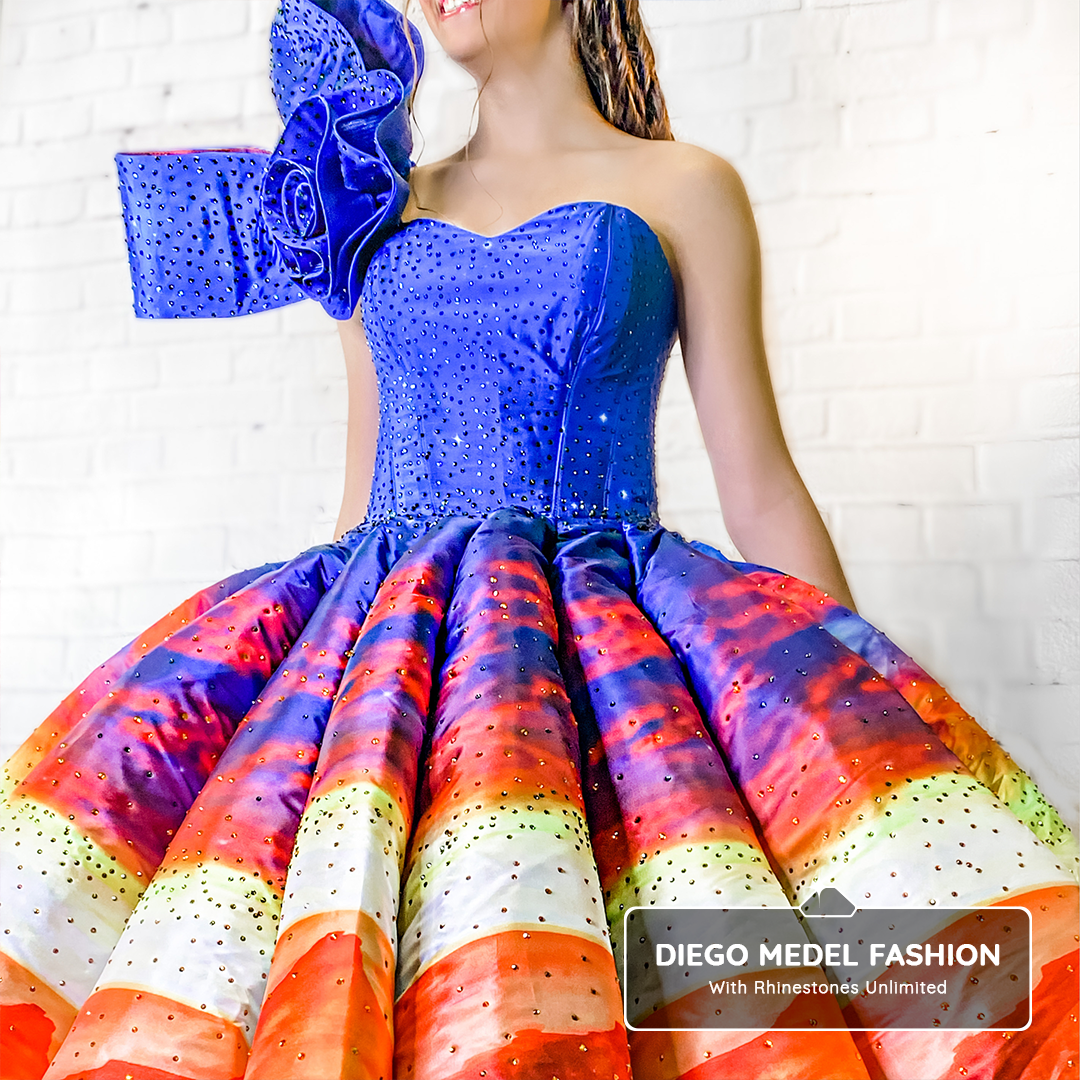 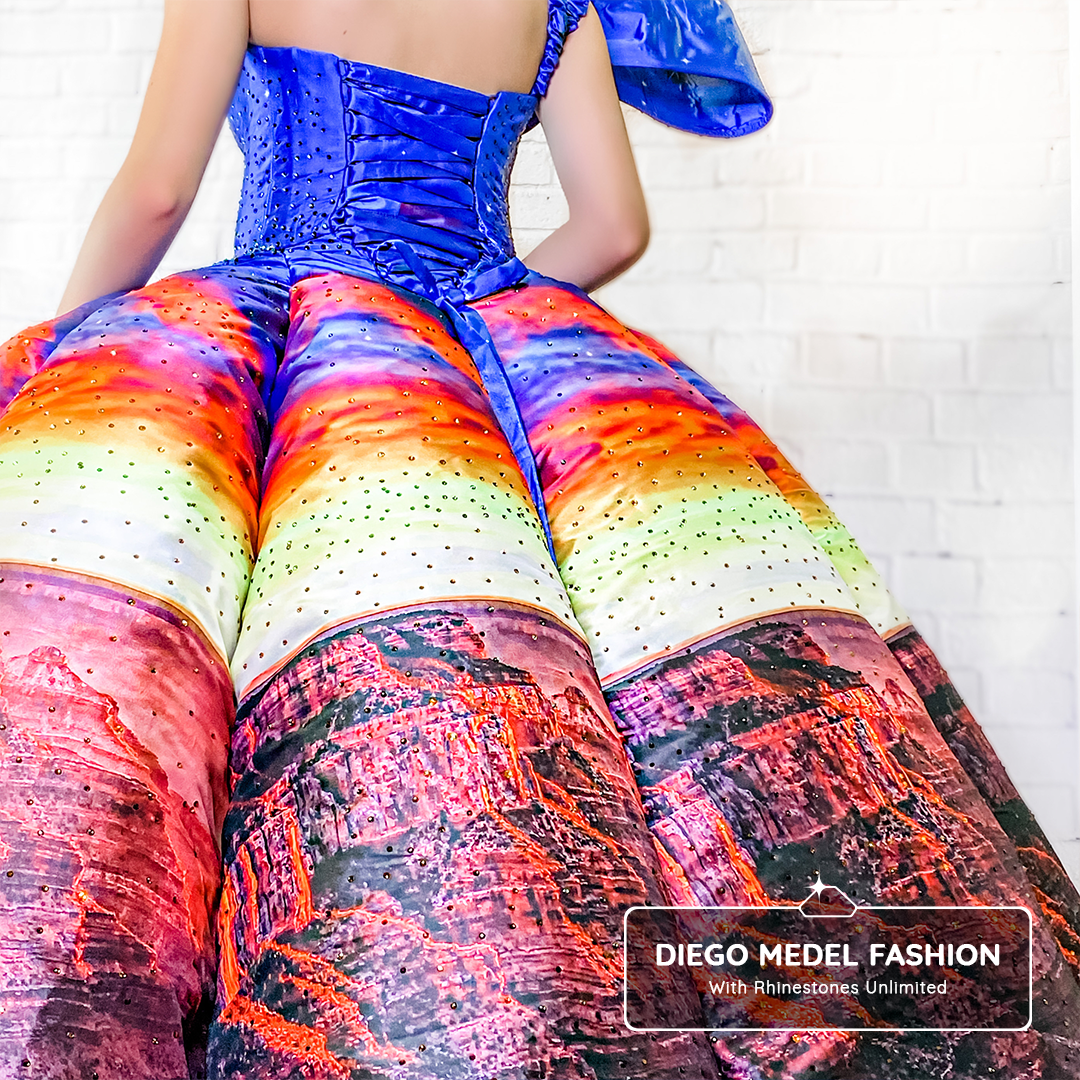